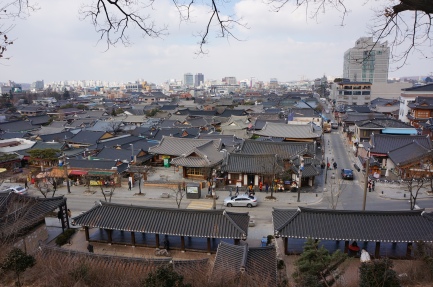 Jeonju is the only city with a 1200-year history of two dynasties: the birthplace of the Later Baekje Dynasty (9C) and the spiritual capital of the Joseon Dynasty (14-19C) because Jeonju is where the Yi royal family originated. Besides its proud history, Jeonju inherits and creatively develops traditional Korean-style housing called hanok, which is the foundation of traditional Korean culture, UNESCO-recognized food, and pansori, registered as a UNESCO Intangible Cultural Heritage. With over one thousand years of history, the city also inherits and holds traditional techniques of making hanji (traditional Korean paper handmade from mulberry trees) used for The True Record of the Joseon Dynasty, as well as traditional fans and printing.

The Hanok Village in Jeonju is loved by many tourists as Korea’s only community site where you can find about 700 traditional Korean houses in one location.